Smartsheet is a cloud service for work management and collaboration.

When creating a connection, log in with Smartsheet. Skyvia stores only the OAuth authentication token. Skyvia does not store Smartsheet credentials.

To connect to Smartsheet, perform the following steps: 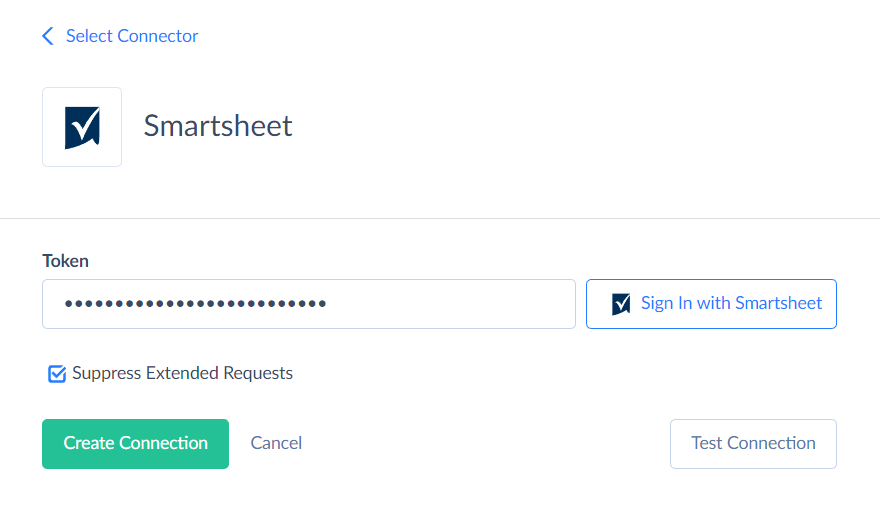 Smartsheet API returns only part of the fields for some objects when querying multiple records. To query the values of additional fields, Skyvia performs additional extended requests for each record of such an object. However, this can decrease performance and significantly increase the number of API calls.

To reduce the number of API calls, select the Suppress Extended Requests checkbox. However, please note that some of the fields in such objects will not be available in Skyvia (will return empty values) even if they have values in Smartsheet because its API does not return them without extended requests.

To insert data into the Sheets table, you must map either the FromId or the Columns field in addition to the required field Name.

The Start column is used for filtering and does not return any data when selecting data from it. Thus, it is not necessary to add this column to the selection. If you set the filter by the Start column, the result will contain data modified on the specified date or later.

When selecting data from the Since and StreamPosition, the returned result is empty for these columns,

When querying data from the Events table, set the filter by one of these fields, not by both. Only the =(equal to) operator is supported.

There is a limitation for the INSERT/UPDATE operations against the Columns table. when mapping the Validation field by the Constant, use the True value only. Do not map this field if the record must have the False value.

A part of the Smartsheet functionality is implemented in Skyvia as stored procedures:

Use call DeactivateUser(:userId) to deactivate the user. The specified user cannot access Smartsheet after the procedure execution.

Use call ReactivateUser(:userId) to reactivate the specified user. The user becomes able to access Smartsheet after the procedure execution.

Use call MakeAlternateEmailPrimary(:userId,:alternatEmailId) to make the existing alternative email the primary email for the specified user.

Skyvia supports the Replication with Incremental Updates for the following Smartsheet objects:

Incremental Replication considers only the new records for the Attachments and ProofAttachments tables. These tables contain only the CreatedDate field, and there is no UpdatedDate field which would have allowed considering the updated records.

Skyvia supports all the common actions for Smartsheet.