For example, in Salesforce, there is a relation between Account and Contact objects. Account can have zero, one, or multiple linked contacts. This relationship is actually determined by the AccountId field of the Contact object, which stores the ID value of an account, the contact belongs to. We can call it a foreign key to the Account table by analogy with databases.

When you import related database tables or cloud objects, you can specify the relation mapping simply by selecting the source relation to use — whether it is a database foreign key or a relationship between cloud objects. CSV files don’t store any relationship definitions. However, when you import several CSV files in one package, and they contain the related data (to be exact, when a field of one imported CSV file uniquely identifies a row of another imported CSV file), you can use the relation mapping and manually select the referenced CSV file and the corresponding fields, as described below.

Skyvia fully supports self-referencing relations (when an object or table references itself), for example, the Parent relation in the Salesforce Account object. However, Skyvia does not support polymorphic relations, when the same foreign key can reference rows from different objects. For example, the Contact object in Dynamics 365 has the parentcustomerid field, which can reference another contact object or an account object. Skyvia does not support such relations.

When to Use Relation Mapping

Relation mapping can be used when you import several source objects or files with related data to several related objects. It provides the easiest way to build relations between the imported target objects based on relations between source objects. Especially this can be useful when you import data to a cloud application, and the detail object references the master object by its ID, since you cannot get this ID before actually inserting the master data.

For example, when we import data to Salesforce accounts and contacts from similar related objects of another CRM, you can use Relation mapping for the AccountId field of the Contact object and select the corresponding relation between source objects or files. When performing import, Skyvia will import the parent (Account) objects first and retrieve the ID values of the result accounts. When importing contacts, it will automatically assign the ID values of the imported accounts in target, corresponding to the source objects that are related to the contacts being imported. 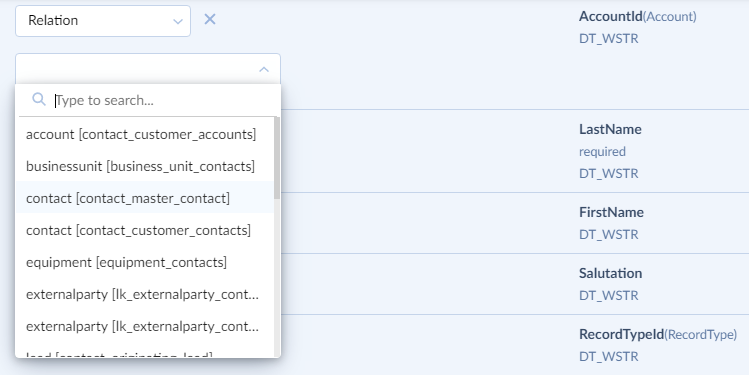 To see more examples of relation mapping, take a look at our tutorial How to Import Tables from SQL Azure tutorial.

How to Configure Relation Mapping 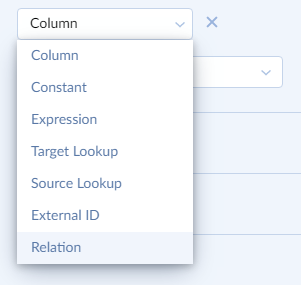 After this, you need to do the following: