Zoho Projects is a cloud-based solution for project planning and tracking projects for team collaboration, and achieving project goals.

To create a connection, log in with Zoho account, then specify Data Center and Portal Name. Skyvia stores only the OAuth authentication token. Skyvia does not store your credentials. 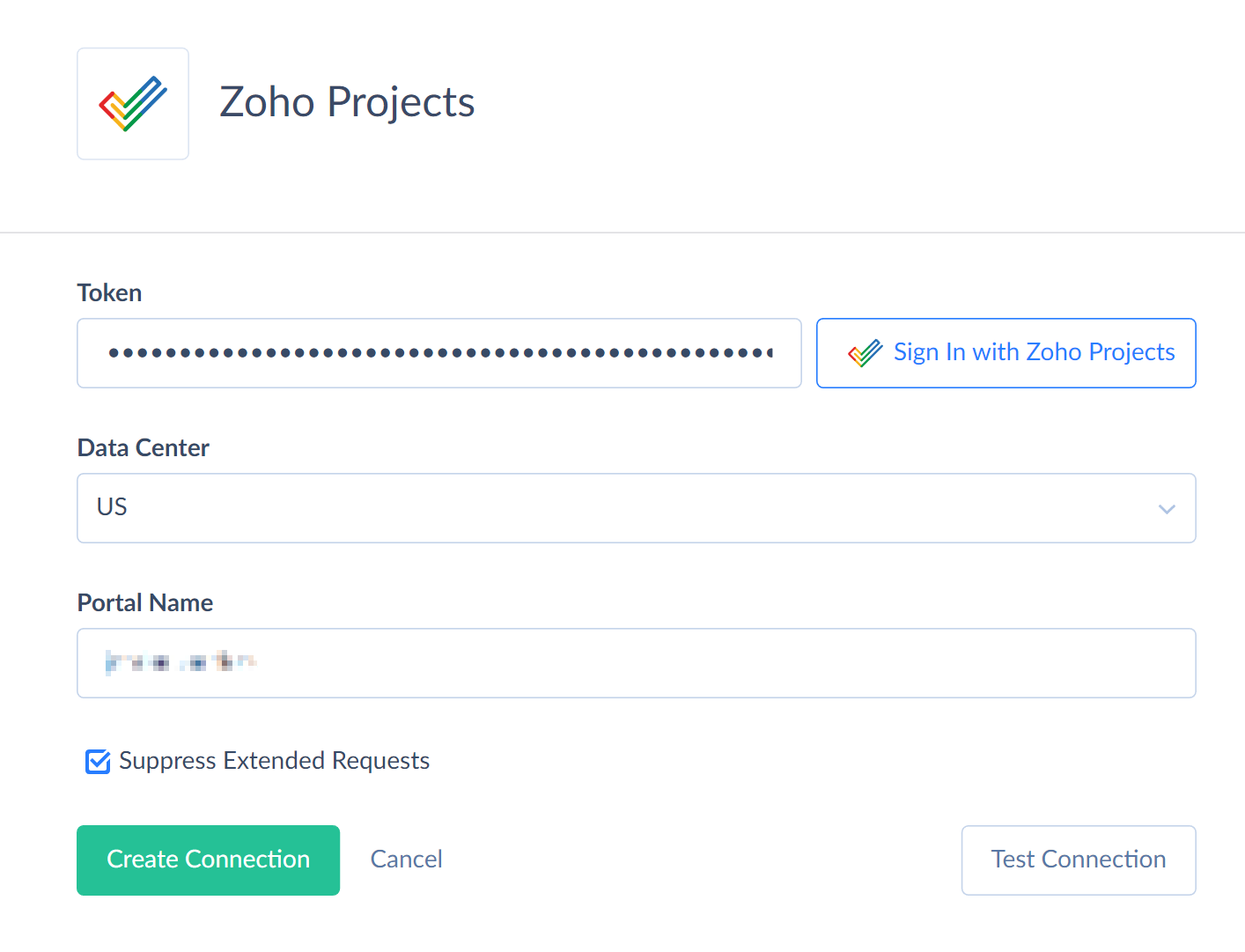 To connect to Zoho Projects, perform the following steps:

For some objects, Zoho Projects API returns only part of the fields when querying multiple records. In order to query values of additional fields, Skyvia performs additional extended requests. Such API requests can be performed for each record of such object. However, this can decrease performance and significantly increase the number of API calls used.

To reduce the number of API calls, you can select the Suppress Extended Requests checkbox. However, please note that some of the fields in such objects will not be available in Skyvia (will return empty values) even if they have values in Zoho Projects because its API does not return them without extended requests.

Skyvia works with date fields (StartDate, EndDate, DueDate, LogDate in all tables storing such fields) as String because of datatype conversion specifics in Zoho Projects API. Pass the dates in the ‘MM-DD-YYYY’ format when importing data to such fields.

Add the 0 character to a single-digit value when performing the INSERT operation to the Hour, Minutes, DurationHour, DurationMinutes fields.

This table has empty records with a single value Split = true. Such records visually divide the table content by upload date. For example by Today, Previous 7 days, Earlier.

Zoho Projects allows performing 100 API calls per 2 minutes against one endpoint. When this limit is exceeded, all further calls to the same endpoint are blocked for 30 minutes. However, you can perform API calls to other Zoho Projects endpoints.

For example, you can Import 100 records at once for the Tasks table. All other records return the Cannot execute more than 100 requests per API in 2 minutes. Try again after 29 minutes. In this case the Import is blocked for the Tasks table, however you can select data from this table

Incremental Replication considers only the new records for the Events, Projects, TaskComments tables. These tables contain only the CreatedDate field, and there is no the UpdatedDate field which would have allowed considering the updated records.

Skyvia implements such actions as adding, updating, and deleting _Users) from the portal and creating contacts as stored procedures.

This stored procedure adds users to a Portal. Note that these should be the users that are already added to the Zoho One account. You cannot just add arbitrary emails.

This stored procedure updates a User on the Portal. Here is the list of parameters:

call DeleteUserFromPortal(:userId) - deletes the user from a portal.

This procedure creates new client contacts in the portal. Here is the list of parameters:

You can use a call to the stored procedure, for example as a text of the command in the ExecuteCommand action in a Target component of a Data Flow.

Skyvia supports all the common actions for Zoho Projects.